History of the Mulcaster Name 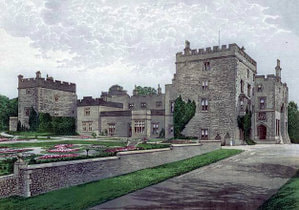 ​Origin and Meaning of the Name.Mulcaster/Muncaster

All the Mulcasters are descended from one David de Mulcaster, the son of Benedict Pennington who lived in King John's time.

"David had two sons - John and Adam, both called de Mulcaster, and so their posteriety take their surname of the place where their first ancestor David died."

This word is derived from the Celtic meaing - "a bare hill" or "headland". (compare the Mull of Cantire). A plain dry ground between the mountains and the sea that the old inhabitants used to call such places the mule or meold. Eskmeal (where the ancient castle stood) is a plain low dry ground at the foot of the Esk, between the mountains and the sea.

An old England term referring to an ancient fortification, usually of Roman date.

Comes from the latin meaning "fortress on the hill"

MULCASTER/MUNCASTER HISTORY
A castle near Eskemeold being a plain dry ground between the Mountains and the sea. This place is a fee belonging to the seignory of the Penningtons ever since the conquest, sometimes collaterally but for the most part lineally descending by their issue male to this time who took their surname from Pennington in Lancashire.

Though this manor (of Mulcaster) was always theirs as aforesaid, some have greatly mistaken the same to have been first the Mulcaster's patrimony and to have come from them to the Penningtons by marriage or purchase.

Mulcaster - The next fee unto Millum, holden immediately of the barony of Egremont, is Mulcaster, seated on the north side of the seignory of Millum. The manor is bounded between the river Eske and a little rill or beck called Mite. It is in form a long ridge or rising ground of hills from the foot of Eske, extended along between those rivers unto the great and vast mountains belonging to Egremont in Eskdale, Wastdale, and Mitredale. There are not many under fees belonging to this mannor.

The place is now corruptly named Moncaster/Muncaster, howbeit the right name is Mulcastre or Meol-castre, of an old castle there towards the water side near Eskmeal, which was the ancient dwelling place of the Penningtons, and is yet visible in the ruins, they call it the Old Walls (now Walls Castle - the remains of a Roman Villa, standing close to the Roman camp, which names the place). The present mansion house is of later erection, made by some of them, much better and more conveniently set for state and avoidance of the air, and sharp distempers from the sea. It was called the Meolcastre or Mulecastre, from the meal on which it anciently stood, and it is accordingly written Mulecastre and Mealcastre, in all their old evidences and records.

"Other early Anglican sites may be indicated by the suffix ceaster or caster, an old English term referring to an ancient fortification, usually of Roman date. Only two more names are added to the list...Muncaster (1096) stands at the entrance to Eskdale and seems to refer to the Roman settlement at Ravenglass where the placid tidal reach of the Esk and Mite is screened from the Irish Sea by a mountainous ridge of sand-dunes."

"In 1242 Furness Abbey added another 14,000 acres to its mountain territory with the acquisition of upper Eskdale. This estate was the result of exchange with David de Mulcaster who received one of the abbey's properties. Monk Foss (1185) situated at the foot of the steep western slop of Black Combe".   `bartering for sheep farm in exchange for estate on coastal plain.'

Muncaster Castle (1096), magnificently sited above the estuary of the Esk... There Anthony Salvin built the relics of medieval castle and pele tower into a sumptuous Victorian mansion enveloped amid plantations filled with rhododendrons and many imported conifers. Muncaster Castle and its park are romantic and Victorian in conception, rather than Georgian; they belong to the world of tourists and guidebook writers of the 19th century.